A Promise Made Is a Debt Unpaid…

Saturday September 10, 1938 was the end of two long days for Coast Guard Seaman First Class Rudolph Jones. He had suffered through the typical hot humid late summer days usually found on the firing line at Camp Perry, Ohio during the National Board for the Promotion of Rifle Practice’s National Trophy Matches. His left bicep had been held in a tourniquet like grip by the M1903 rifle sling while his shoulder had been pounded by the recoil of 60 rounds of .30-06 service ammunition fired through his Springfield Model 1903 Rifle.

While a bit sore and weary Jones also beamed with pride. He had put together a pretty tall score, dropping 13 points out of a possible 300, to be the top gun on the United States Coast Guard Rifle Team in the National Trophy Team Match. Six of those points slipped away during the first stage of the match, slow fire standing at 200 yards. After the rapid fire stages, ten shots at 200 yards sitting and another ten at 300 yard from the prone position he was still only down six-all 20 of his rapid fire shots had hit the black for two perfect 50s. The second day of the match was all prone and he followed up his short range performance with a 48 slow fire prone at 600 yards and a 95 slow fire prone at 1,000 yards totaling a team high 287X300, six points ahead of his nearest teammate, Gunner’s Mate Second Class Peter Marcoux.

When the statistical office had tallied and collated all of the scores Jones found himself not only the best Coastie but the best of the 1,250 riflemen who had fired the match. As well as he shot it was close as Jones won on a tie breaker. Corporal Clifford W. Rawlings, of the Marine Team, had fired the same aggregate score but Jones’ 1,000 yard score was a point better.

Jones was a bit disappointed that his effort did not help his team do any better than third overall. Nevertheless he took great pride in winning the Pershing Trophy and was presented a smaller keeper version of the trophy along with a gold medal for his efforts.

The North Carolina native, now a Gunner’s Mate, was stationed at the Coast Guard Academy, New London, Connecticut during the early years of World War II. Upon being detached from the Academy he asked a shipmate, Charles E. Benedict, to take care of his bulky keeper trophy until he returned. The gold medal, being more easily transported, went with him.

Jones disappeared into the mists of history but Benedict, true to his word, safeguarded the trophy until his death when the trust was passed on to his daughter Carol. Seventy years after Jones asked Benedict to look after the trophy, in August of 2013, Richard Chiango, Benedict’s son in law, contacted the author asking for help in locating Jones or his next of kin so that the trophy might be returned.

Jones, being a common name, a fruitless search resulted. It was then suggested that the trophy be donated to the Civilian Marksmanship Program, the successor organization to the National Board for the Promotion of Rifle Practice, who might welcome the historical artifact to its trophy collection. Chiango contacted the CMP’s Christie Sewell, who was delighted at the idea, and started the ball rolling for the acquisition of the trophy.

After seven decades in limbo Jones’ keeper trophy now stands next to the original in a place of honor in one of the display window that fronts the CMP’s headquarters at Camp Perry.  It arrived almost exactly 75 years after it had been presented to Jones and rests just a short distance from where it was earned on that long ago September 1938 afternoon.

Its presence is a tribute to Jones’ skill as a rifleman and the honorable discharge of a trust by Charles E. Benedict and his family. As Robert Service wrote in The Cremation of Sam McGee, “A promise made is a debt unpaid.” The Benedict and Chiango families have discharged their debt in full. 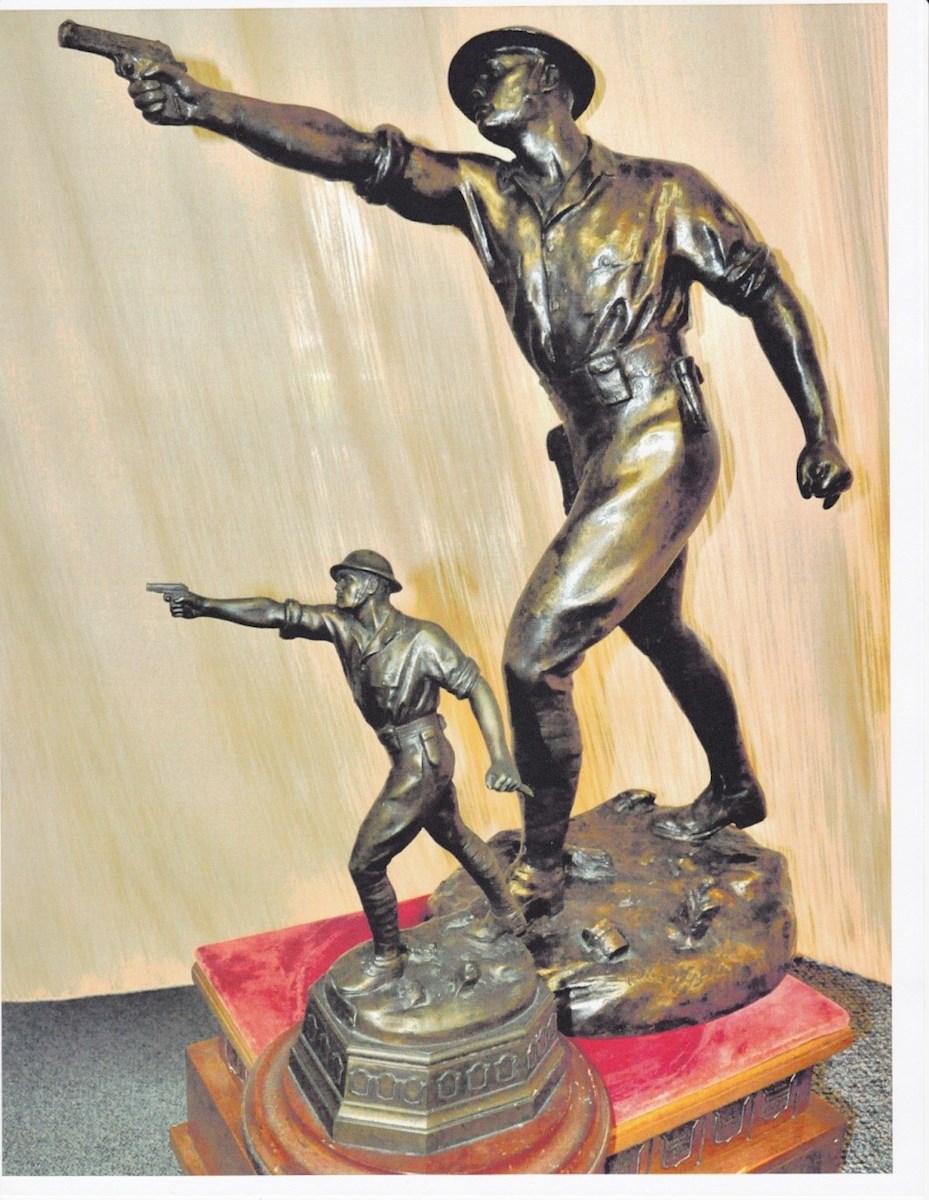 Jones’ keeper trophy is shown here, along with the original, as currently displayed at the CMP Headquarters at Camp Perry. The Pershing Trophy was presented by General of the Armies John J. Pershing (1860-1948), Commander of the American Expeditionary Force of World War 1, for team competition at the Inter-Allied Games in Paris in 1919.  Won by the AEF, it was brought to the United States and placed in the custody of National Board for the Promotion of Rifle Practice with General Pershing’s concurrence.  The trophy is a bronze figure of a World War I soldier firing, oddly enough for a rifle match, the service pistol.